Increasing cost pressure and legal requirements to reduce the CO2 emissions are forcing steel producing companies to improve the energy efficiency of their plants. The secondary cooling system of continuous casting machines with air-mist cooling provides opportunities for savings. In particular, the consumption of compressed air causes significant energy consumption and operating costs. These facts were among others the basis to develop a new generation of air-mist nozzles for slab casting.

The focus of this development was the reduction of air consumption of the nozzle significantly while maintaining the cooling efficiency. In addition, a high water turndown ratio, a constant spray angle and a uniform spray pattern should be achieved as well as compatibility to existing well-proven Mastercooler series.

The result of this development is the new nozzle series Slabcooler Eco which satisfies these demands and provides an air saving potential of about 30 % over a large turndown range. Extensive testing of the spray characteristics in terms of spray appearance, liquid distribution, pressure-flow rate and cooling efficiency has been conducted. The potential savings are based on a comparison with an equivalent nozzle of the Mastercooler series.

The Slabcooler Eco series offers the opportunity to reduce air consumption of the secondary cooling and thus significantly contribute to energy efficiency and cost savings. The existing productivity and quality will be maintained without mayor modifications to existing secondary cooling systems.

Energy efficiency is one of the keys to face the global challenges to meet the environmental and economical standards in global steel production. In continuous casting processes, one of the main factors for operating and energy costs is the compressed air consumption within the secondary cooling system. In recent decades the performance of secondary cooling systems in continuous casting processes has been increased in terms of flexibility and cooling efficiency in order to optimize product quality and productivity.

Increased flexibility is often directly correlated with a high water turn down ratio of the air-mist spray nozzles. The water turn down ratio is still the most common parameter correlated to secondary cooling flexibility - although others parameters such as nozzle layout (spray angle, nozzle pitch and spray height), air pressure range, water pressure range and air-water ratio have to be considered as well. Also resulting parameters such as spray impact force or droplet size and speed have a strong effect on the cooling efficiency. The reason for this is the water flow rate being a parameter that can easily be quantified. However there is no standardization for water turn down ratio and typically no correlation to water distribution or cooling efficiency as such. Therefore absolute values of this parameter should be closely related to the context.

The increased cooling efficiency has been achieved utilizing higher water and air flow rates as well as variable air pressure. By this improved air-mist atomization could be achieved for a wider range of water flow rates. At the same time nozzle layouts have been modernized with an increased number of nozzles for each roll gap and reduced spray height and spray angle of each nozzle to meet the modern roll layout of casting machines.

However high compressed air-consumption and operating costs remain critical economical factors for operation of air-mist secondary cooling systems. Lechler started a project to develop a new generation of air-mist nozzles with the aim to maintain the advantages of existing air-mist nozzles while reducing the compressed air consumption and related operating costs. The new generation of nozzles shall also fit into existing secondary systems without mayor modifications to header design or secondary cooling control.

The well proven Lechler Mastercooler nozzle series has been used as the basis for product improvements. Mastercooler nozzles are air-mist flat fan nozzles installed in many state of the art slab caster secondary cooling systems worldwide. The optimal performance in terms of maximum cooling capacity, liquid distribution and cooling efficiency characteristics has to be maintained in order to enable direct implementation of the new nozzle series into existing secondary cooling systems. By fine tuning and reassembling the most critical parts of the air-mist nozzles alternative methods have been used to optimize the nozzle performance. The final result of this development project is a new nozzle series called Slabcooler Eco which is meeting these requirements while reducing the air consumption at the same time.

Figure 1 shows the identical outer geometry of all investigated nozzle types. As a result, the Slabcooler Eco series will fit into existing secondary cooling installations without mayor mechanical modifications. This principle can be transferred to most existing air-mist shaft nozzle geometries used on modern slab casting machines.

In order to evaluate the spray performance of the new nozzle type, different nozzle sizes have been designed in a way to match existing Mastercooler nozzle types in terms of size, maximum water flow rate, spray angle and liquid distribution. Table 1 provides a summary of the investigated nozzle types and main spray parameters. 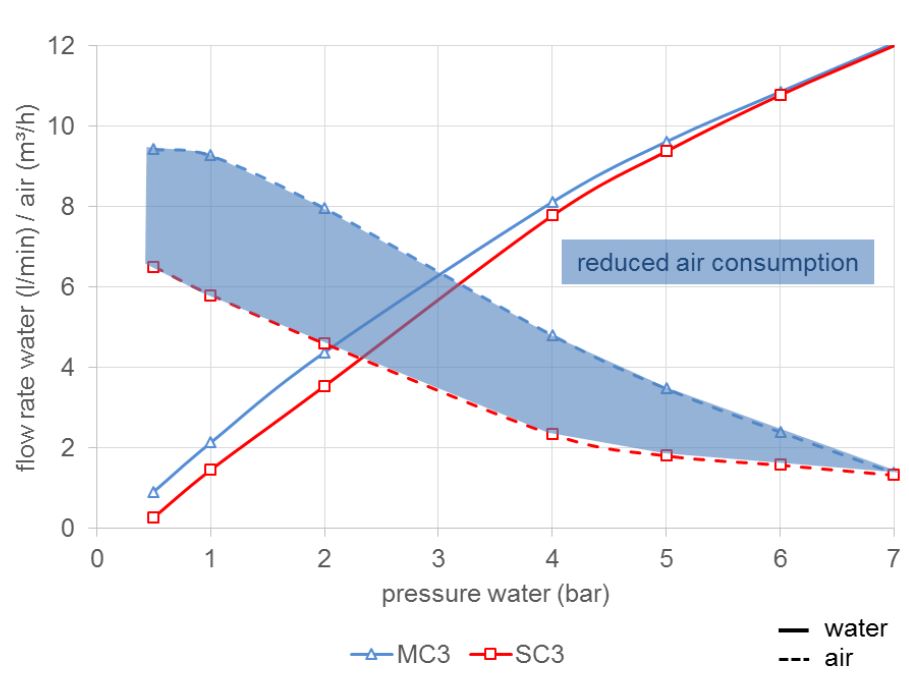 The above described nozzle types were characterized with the Nozzle-Measuring-Stand (NMS) at the Chair of Ferrous Metallurgy at Montanuniversitaet Leoben. The characterization of a nozzle comprises usually the measurement of the water distribution of the spray in two dimensions and the determination of the local heat transfer coefficient (HTC) for given parameters, as e.g. water flow rate, air pressure, surface temperature or casting speed. Within the scope of the present work only the measurement of the heat transfer coefficient and the achieved results will be discussed in detail.
The arrangement of the NMS is shown in Figure 4. The sprays are directed upwards and the droplets impinge the surface of a corrosion resistant steel (1.4841) cylinder which is heated up to a defined surface start temperature TStart by inductive heating. After holding this temperature over a certain time the cylinder is moved through the spray with a velocity according to the simulated casting speed. Three thermocouples, which are mounted inside the sample, record the change in temperature caused by the spray. From this temperature profile the local HTC is calculated by an inverse heat conduction method. This HTC accounts the convective part as well as the part caused by radiation. [1] 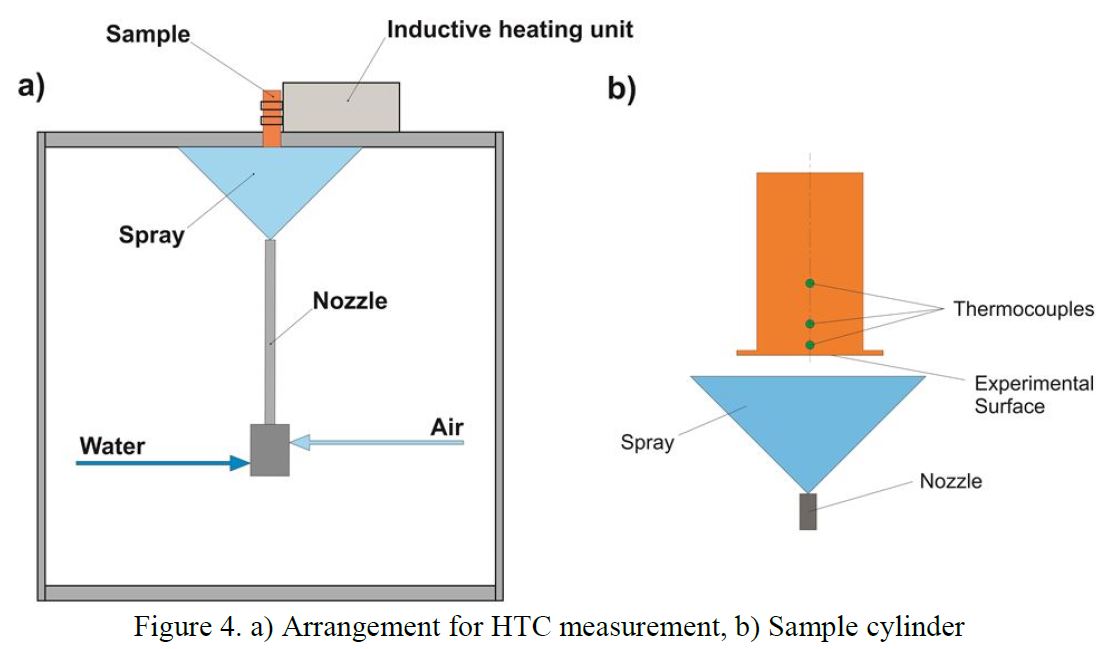 For this work following process conditions were set to be constant:

For every condition, measurements have been conducted in 4 locations transversal to spray width in “casting direction” as shown in Figure 5. The pitch between 2 measurements has been set to 40 mm. 3 measurements in the center area will represent typical direct secondary cooling area. The measurement close to the edge of the spray is typically part of the overlapping area between two adjacent sprays on the slab surface. 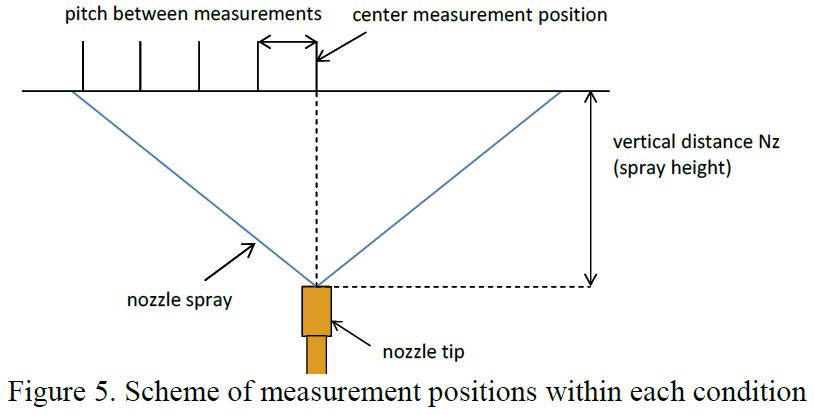 An example of measured HTC distributions in varying distances from the center of the spray is shown in Figure 6 a). Each curve represents the calculated HTC during passing through the spray. From this curves the mean HTC (HTCmean) over spray contact time (tspray) was calculated, like it is shown in Figure 6 b). This characteristic value was used for the further discussions.

Figure 6. a) Typical results of HTC measurements (MC3, pwater = 2 bar, pair = 2 bar), b) Example for HTCmean calculation
As mentioned before, for each set of parameters the local HTC was measured in four distances from the axial center of the spray cone. Figure 7 gives an overview of the resultant HTCmean for the nozzles MC3 and SC3. The HTCmean correlate with the measured water distribution profile and measurements with higher water/air pressure result in a higher HTCmean. Similar results are shown for the nozzles MC5 and SC5 in Figure 8.

A comparison of MC5 and SC5 (Figure 10) shows a reduction of air consumption for water flow rates from 2-15 l/min as high as 20-25 % at equivalent cooling performance. The overall cooling performance range of the Slabcooler Eco is increased compared to the Mastercooler type nozzle. 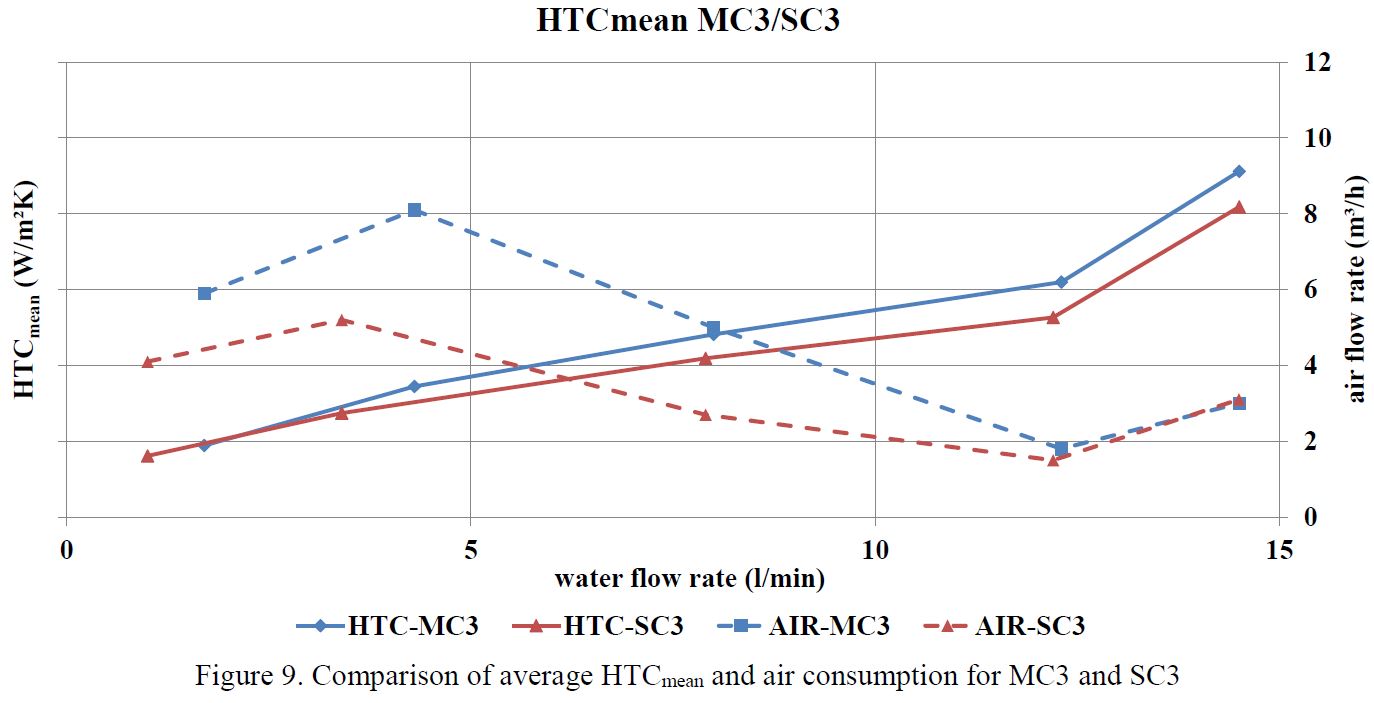 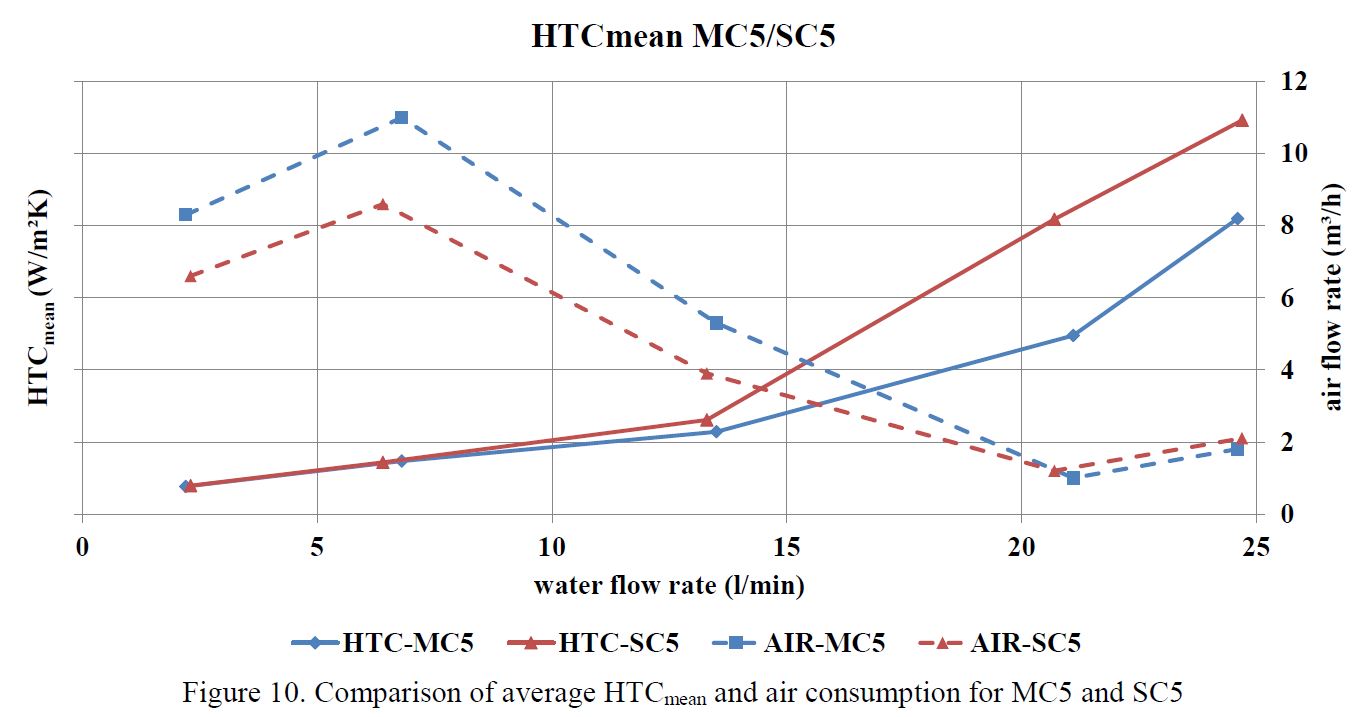 Figure 10. Comparison of average HTCmean and air consumption for MC5 and SC5

The new air-mist nozzle series Slabcooler Eco has been developed to meet the increasing demand for energy efficiency. This new nozzle series is providing the required the spray performance and the flexibility in terms of cooling capacity. Test results of Slabcooler Eco have shown equivalent spray performance in terms of spray characteristics and cooling efficiency compared to the existing well-proven Mastercooler Series, which is installed in many slab caster secondary cooling systems worldwide.

A simple way to compare the energy efficiency of both nozzle types is to correlate the measured HTCmean and the individual water and air flow rates and pressures. The parameter “HTCmean Energy ratio” is calculated from HTCmean divided by the product of air and water flow rates and pressures has been calculated for all tested conditions as a measure for the energy efficiency. Figure 11 plots the relative values for Slabcooler Eco type nozzle compared to the equivalent Mastercooler types results, which are set to 100 %. Clearly the increased energy efficiency and saving potential is pronounced of the new nozzle generation is visualized – especially for conditions at lower flow rates (conditions 1-3). 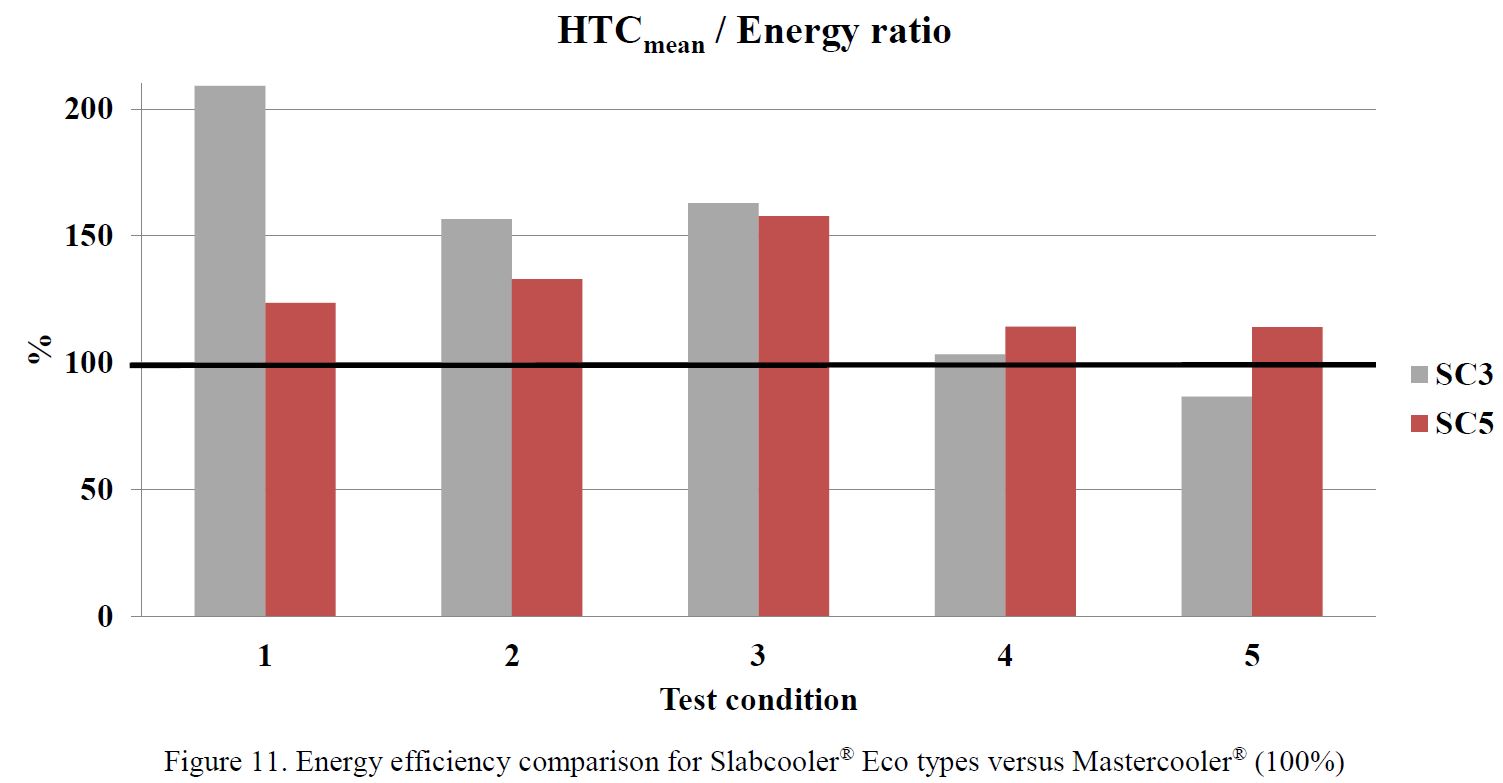 Based on these results a conversion of existing slab caster secondary cooling systems to Slabcooler Eco technology offers the potential of maintaining the existing maximum productivity while increasing the cooling flexibility and reducing the average secondary cooling compressed air consumption by 30 %.

The required conversions are only affecting the spray headers for nozzle mounting - depending on the existing design. Ideally, only the adapter plates need to be slightly modified. The secondary cooling control might require minor adjustments to address the modified cooling performance of the Slabcooler Eco compared to the existing nozzle type.